I’m craving this quesadilla all over again! If you love Philly Cheese Steak Sandwiches…you will LOVE this quesadilla! It’s the melted cheese, tender crisp veggies and savory roast beef that make it so yummy!

Now that it’s just Justin and I here for lunch it’s really quite boring. I keep telling myself that I will start making salad, or sliced apples or a healthy smoothie for lunch. I could save most of my daily calories for dinner. For some reason I always concoct things in my mind like this yummy quesadilla to make. Then I just gotta try it. Besides I know one my kids wouldn’t want to eat it because it has peppers and onions. So we’ve gotta eat it for lunch. Bye bye saved calories! Oh well, it was worth it. Besides I went for a bike ride today so I think I earned a few extra calories anyway! Slice some peppers (I only had green but other colors would be pretty) and onions. Saute them in butter over medium-high heat for a few minutes. Only until they are crisp tender. Once they are done remove from heat and set aside. Another layer of cheese. Just a little, it melts and holds everything together! More cheese. Remember it holds everything together. Besides this is Swiss and the first layer was cheddar. The second layer was pepper jack.

Put a second tortilla on top of the whole thing. Watch close. When the first tortilla is golden brown, carefully flip it over. When the second layer is golden, the insides should be all melted and yummy. Remove from the heat. Let the whole thing set for a minute. Then cut into wedges. I’m still thinking to heck with the healthy smoothie for lunch tomorrow. I’m having this again! It was seriously one of the best quesadillas I have ever had! I’m pretty sure I’m addicted!

Recipe is featured at the following link parties: 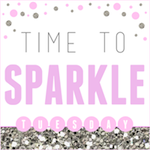